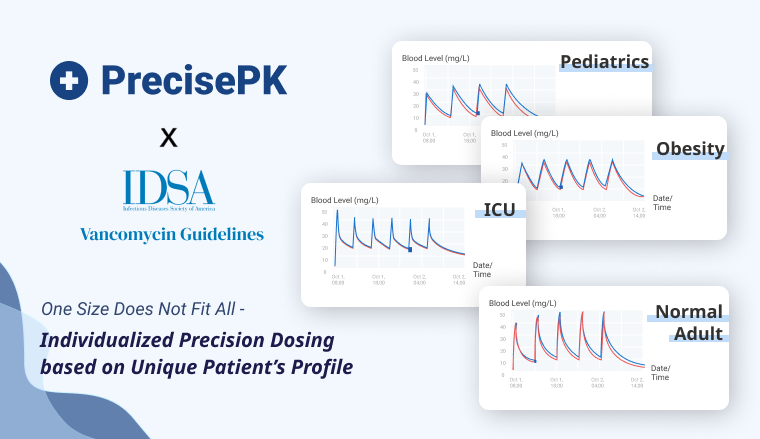 Previous 2009 guidelines recommended the use of trough monitoring as a surrogate marker for the area under the curve divided by minimum inhibitory concentration (AUC/MIC) of 400 mg*h/L to simplify vancomycin therapy management, but this came at the cost of increased nephrotoxicity and acute kidney injury (AKI).

Trough-based dosing is no longer recommended, and an AUC/MIC-guided dosing with a target of 400-600 mg*h/L within the first 24-48 hours is suggested for most invasive methicillin-resistant Staphylococcus aureus (MRSA) infections in adults and children. PK/PD and toxicodynamic studies show a significant reduction in vancomycin exposure and nephrotoxicity without compromising outcomes when using AUC/MIC vs traditional trough monitoring approaches.

Loading doses for patients who are critically ill, on renal replacement therapy, or on continuous infusion therapy should be based on actual body weight.

Since the 2009 publication of the vancomycin consensus guideline, many others have evaluated the clinical safety and efficacy of trough-based dosing. In 2020, the American Society of Health-System Pharmacists (ASHP), the Infectious Diseases Society of America (IDSA), the Pediatric Infectious Diseases Society (PIDS), and the Society of Infectious Diseases Pharmacists (SIDP) revised their 2009 recommendations and published a new consensus on the optimization of vancomycin dosing and monitoring for serious MRSA infections such as bacteremia, sepsis, infective endocarditis, pneumonia, osteomyelitis, and meningitis. These changes arose from vancomycin-induced nephrotoxicity (VIN) and AKI associated with using 15 to 20 mg/L trough-based dosing without regard to AUC.
‍
Key elements of the revised 2020 vancomycin dosing guidelines include: the transition from a trough-based to an AUC-based dosing target, ‍the utilization of Bayesian dosing to accurately calculate daily AUC values with non-steady-state levels, and an AUC/MIC target of 400-600 mg*h/L for serious invasive MRSA infections.
‍
‍Bayesian-guided precision dosing platforms are essential tools to facilitate the implementation of AUC/MIC-based vancomycin dosing guidelines and to optimize clinical practice. PrecisePK is a Bayesian dosing software that has been shown to predict the future vancomycin AUC most accurately in critically ill patients, who are at increased risks of treatment failure due to altered antimicrobial pharmacokinetics2, according to a recently published peer-reviewed study3. Since 1986, we have worked with several renowned institutions such as UC San Diego, UC San Francisco, Sharp Healthcare, etc.

Why use target AUC/MIC versus trough when dosing Vancomycin?

Another study by Pai et al. 2014 demonstrated the relationship between trough levels and AUC.6. Trough concentrations correlate with significant inter- and intra-subject variability in  AUC24. Although the vancomycin 15-20 mg/L trough target concentration ensures clinical efficacy of treatment, it does not guarantee optimal AUC/MIC in patients with MRSA infections and may lead to AUC values associated with an increased risk of AKI.

Trough concentration, when maintained above 15 to 20 mg/L, is associated with increased risk of VIN. The AUC-guided vancomycin monitoring strategy reduces the occurrence of AKI when comparing trough-guided monitoring8.

How Does PrecisePK Apply Bayesian Algorithm to Compute Vancomycin Dosing?

When combined with the individual patient’s measured drug level, Bayesian posteriori pharmacokinetic parameters are estimated. PrecisePK offers an individual recommendation after just one serum concentration input. In a robust Bayesian program like PrecisePK, the time of drug level acquisition is not necessary to obtain a prediction of individual pharmacokinetics, thus giving a very precise and specific dosing recommendation or AUC prediction.

Why is PrecisePK Capable of Predicting the Most Accurate AUC Among Its Competitors?

Optimize Your Clinical Experience with PrecisePK.
Book A DemoContact Us